It's a tough choice! I went a little overboard on questions but hopefully it can help me out when deciding. 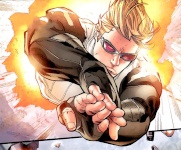 It is a tough choice. Emma is right she had the more influence between the two in the post merge. But all the conditions were right for Emma to thrive while Sue was basically in survival mode.

I have to say this is one of the harder votes, ive had to cast.

Emma's answers aren't blowing me away, she is going the 'apology tour' route and its annoying, she knew exactly what she was doing, but she is basically saying she backstabbed all of us on accident, which means she didn't make moves, she just played sloppy and backstabbed us still.

I agree, this will be one of the hardest jury votes I've ever cast! Makes the F2 even more impressive. You're right that Emma is doing a little more apologizing than she should have, and Sue is really not backing down and showing that she played harder than we thought. I'm excited to see how she answers Johnny's questions.

I feel that sue is slightly fluffing her game up though, because it sounds like she just followed the majority alliance who included HER, she didn't wiggle herself to the top, she was pulled in and if it weren't for those people she would have left a lot sooner, emma could have swapped logan for sue, and logan would be in the end, so sue in my opinion didn't play as masterfully as she is making it out to be.

and lets be honest, she stuck around because she wasn't a challenge threat, and emma knew sue wouldn't make a move against her because emma saved sues life in the game.

I fluctuate between thinking that Sue did some wiggling around to make sure that it was always someone besides her and thinking that she just got lucky because there were always bigger fish to fry.

I'm starting to lean in Emma's direction because as she said, she may have never been an underdog like Sue, but that was because she really put the work in and played a good game that always kept her out of the line of fire. She may have backstabbed a lot of people, but I can admire that whenever she felt threatened by another player she didn't hesitate to eliminate them. It's smart play, even if it isn't honest play.

To be honest, I played with Sue, and she showed up in every single challenge and gave it 100%, she just deserves it more.

Emma wouldn't be here if it weren't for the immunity idols literally handed over to her.

So I think Sue is the better vote.

Sue was more loyal and trustworthy

It's obvious that Emma will try and apologize, she knows she pissed off a bunch of people, and wants their votes back

So i wanted to see some fight from the finalists, so i knew the only way i could do that would be by provoking them, and see how they defend their games.

i basically asked my questions (what sue did in the game)(How emma backstabbed everyone), just in the form of a rant, because i didn't want to hear a nice rehearsed answer.

one defended their game very well, and one went for insults.

it has for sure been a very interesting final lol

I too asked 2 questions that would insult both of them, I want to see how they handle it.

Marrow wrote:So i wanted to see some fight from the finalists, so i knew the only way i could do that would be by provoking them, and see how they defend their games.

i basically asked my questions (what sue did in the game)(How emma backstabbed everyone), just in the form of a rant, because i didn't want to hear a nice rehearsed answer.

you sneaky devil, you

so i guess the avengers are voting sue while the xmen emma?

I think you wanna vote emma too but you are still loyal to sue. am i right torch?

No, are you kidding? I just want to see Sue win, she has been nothing but loyal to me and it sucks that she cannot win because the XMen have such a great majority. Again.

Honestly, if Sue would have taken Storm, I would have voted with her, because it would have showed that Sue would have done anything to win, even her own final 2 partner, she instead wanted to be the honest person and loyal (And that is what Woo did in Survivor Cagayan, and it cost him the win)

I can appreciate a good, honest, and loyal game as anyone here, but I think Emma played a slightly better overall game, she was more "out there" taking the initiative and displaying more skills. she was never really in danger other than the possible blindside right after the merge, in which she successfully talked Illyana out to changing her vote.

yes, but at the same time, I cannot NOT reward my sister for always protecting me, even when the numbers were not by our side!

She practically voted against the majority, and knew that she was doing so, so I want to give her my vote and increase her chances of winning the game!

I get less and less impressed with Sue each question. I came in feeling completely even between Emma and Sue, and Sue is doing great, but the more I hear from Emma the more I lean in her direction. Sue played a very honorable and respectable game, but we all can see that Emma ran this game after the merge.

She had people protecting her left and right (and as she said, it wasn't even necessary most of the time), had pretty much everyone convinced that she was with them 100%, and always waited for the right time to strike. I think she could have played a couple things smarter, but overall I would feel more satisfied seein' her win.

She played the hell out of the game and I can't help myself but to vote for the person who dominated the post-merge over the person who played well but also lucked out that there were always bigger threats. Like Marrow said, if Sue really wanted to win this game she should have shown that fearless, cutthroat strategy Emma has been using the entire game.

I don't think it's about X-Men or Avengers any more, it's just how each individual person prefers to vote.

Sam from my mind to your words, exactly everything I was thinking.

So lets take a vote, are you voting for Sue or Emma?


The last Q I asked Emma was that if she would have made it here without getting Immunity Idols handed over to her. And she still believes that she would have gotten to this stage.

I asked Sue if she feels that she only made it here because she was a inferior opponent, and she basically said yes.

aren't the votes supposed to be secret for a reason? hence why we vote in our confessionals? and not publicly.

It's jury, I think it's ok to discuss who's the better vote here.